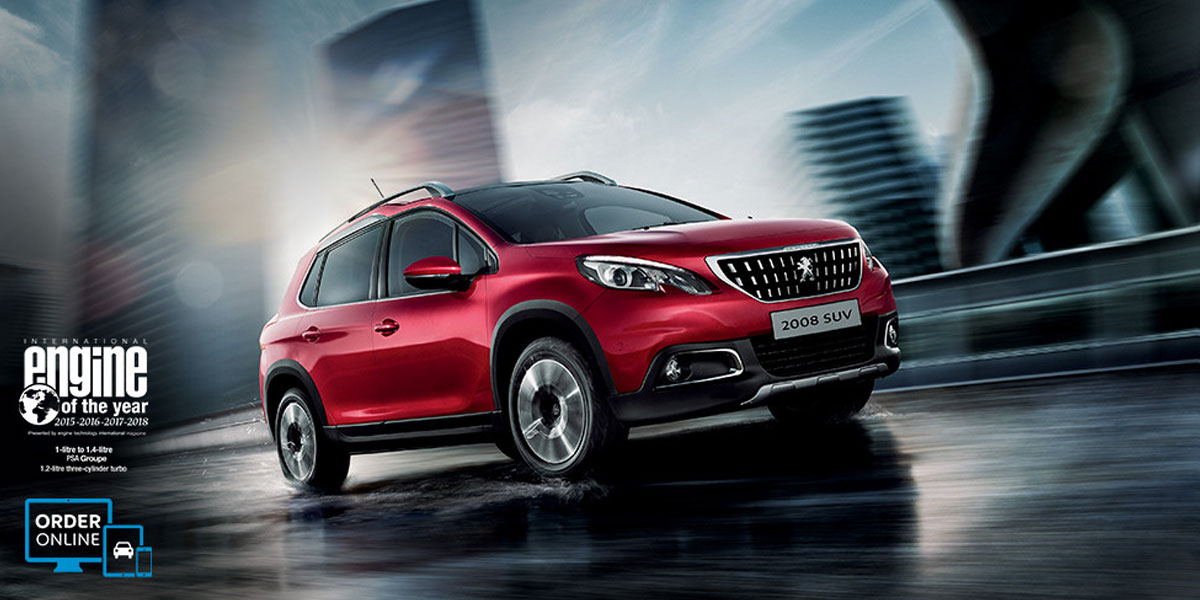 Check out the new Peugeot 2008 SUV, as there’s so much that will interest you.

The car’s exterior features a raft of eye-catching elements, including 3D LED rear lights complete with a three-claw design, hi-tech black and chrome headlights, and a sharp vertical front grille that’s adorned with the iconic Peugeot lion. Inside the new 2008 SUV, you’ll also find a stylish sports steering wheel — providing drivers with precise steering and improved maneuverability — and an incredibly handy head-up instrument panel that you can view without taking your eyes away from the road. Don’t just take our word for how impressive the new Peugeot 2008 SUV is though, as it has the distinct honour of being presented with the 2017 Auto Express Driver Power Best Small SUV award.

With the new Peugeot 2008 SUV, you are presented with a car that instantly captures attention with its sporty look and then further appeals with its connected and practical cabin setup.

The exterior of the new 2008 SUV boasts the strength and character that you’d expect from a compact SUV. A vertical front grille, rear sports spoiler and high-tech headlight array are all pieces of evidence of these credentials. Practicality is another feature of this vehicle’s exterior design, thanks to the inclusion of both front and rear scuff plates, as well as a set of roof bars.

Sleek and sophisticated are sure to be two words that will come to mind when describing the new 2008 SUV’s cabin. A generous amount of glass means that the interior can bathe in natural light, while ultramodern mood lighting works to create a refined and elegant atmosphere. There’s plenty of space in the cabin for up to five adults to sit comfortably, while the car’s boot has a low loading height of 60cm and a volume ranging from 410 litres up to a huge 1,400 litres depending on how the rear seats are positioned.

You won’t be short of state-of-the-art technology when it comes to the new Peugeot 2008 SUV. The dashboard’s focal point is a seven-inch capacitive colour touchscreen, for one, which comes complete with a Connected 3D Satellite Navigation system, a colour reversing camera and music streaming services. There’s so much about the new 2008 SUV which aims to take the stress out of driving too. Park Assist will have you completing journeys with ease, Active City Break looks to keep you safe when you’re travelling along busy urban streets, and Cornering Assist Fog Lights will give you additional visibility when driving around bends at speeds below 25mph.

Active, Allure, Allure Premium and GT Line are the four variations available when selecting the new Peugeot 2008 SUV as your next set of wheels. The Active variation is designed for drivers who want so much technology at their fingertips, while the Allure model is ready to take a variety of terrains and weather conditions in its stride. The Allure Premium model boasts strong visual appeal along with exceptional levels of specification, while the GT Line variant boasts assertive sports styling and an abundance of innovative technology. Find out more about this award-winning SUV by enquiring about the car online or by taking a look at the vehicle in person by calling into either our Peugeot Warrington Motors dealership.

Our best offers on this car

A range of finance options to suit you