"A service plan was talked about.But l have yet to sort one out,if can be done near home"
Mr Paul Glenister
96% Customer Satisfaction

This vehicle is currently in stock at Ford Croydon and can be purchased from Ford Thanet. 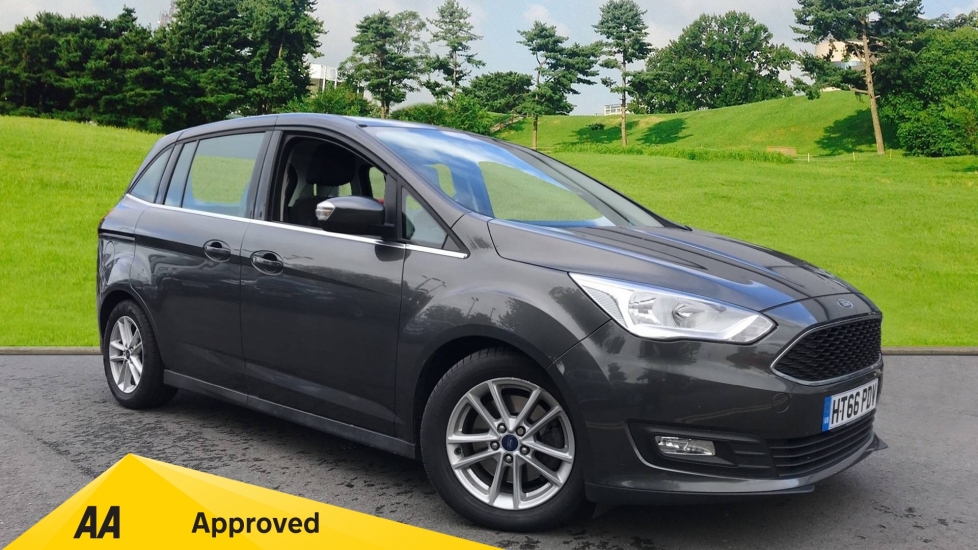 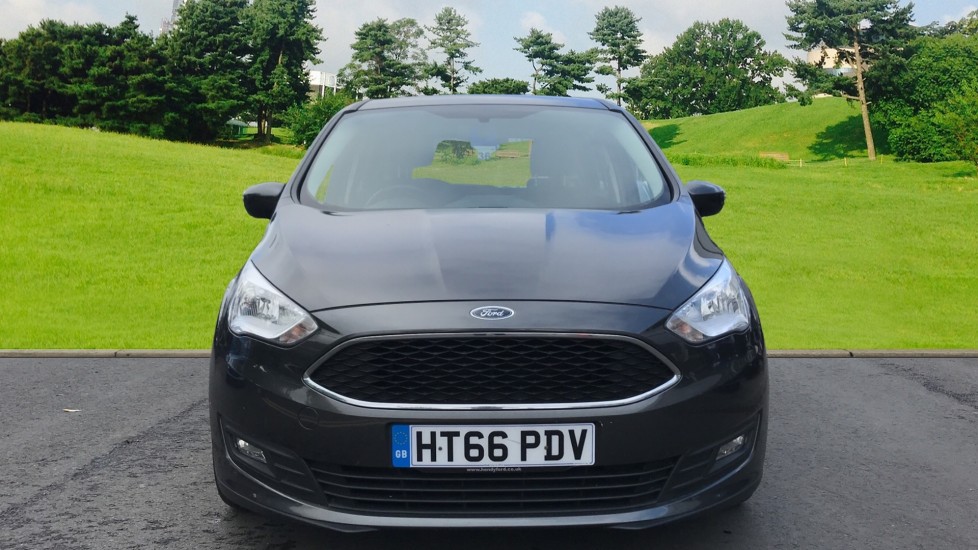 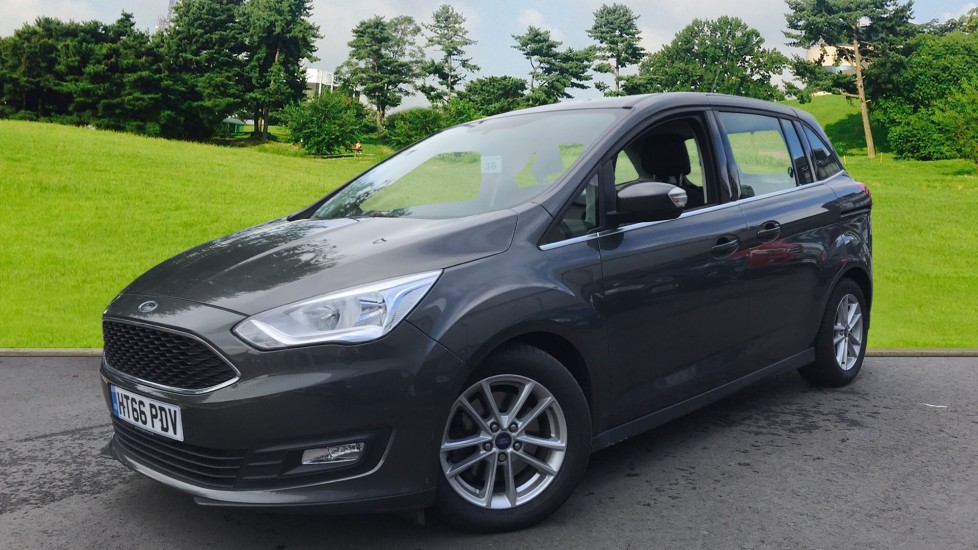 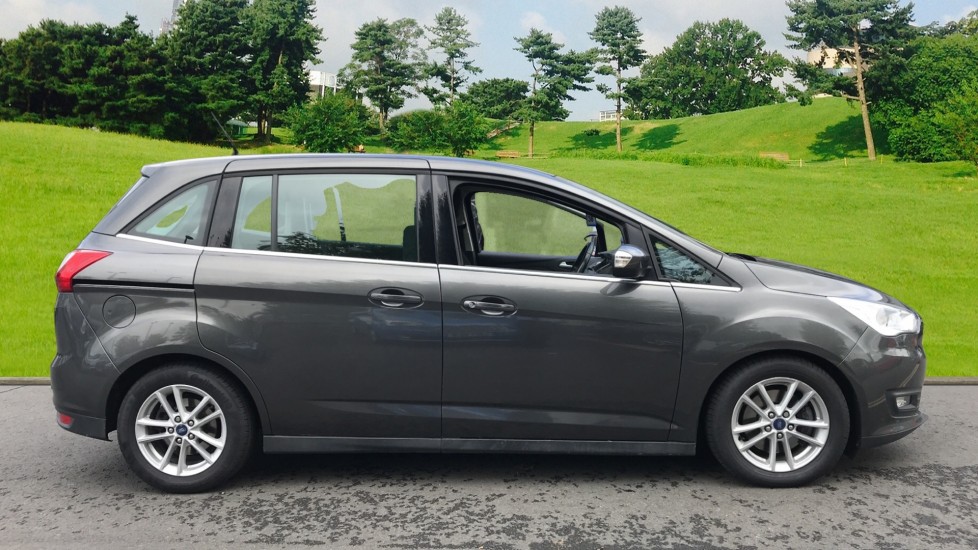 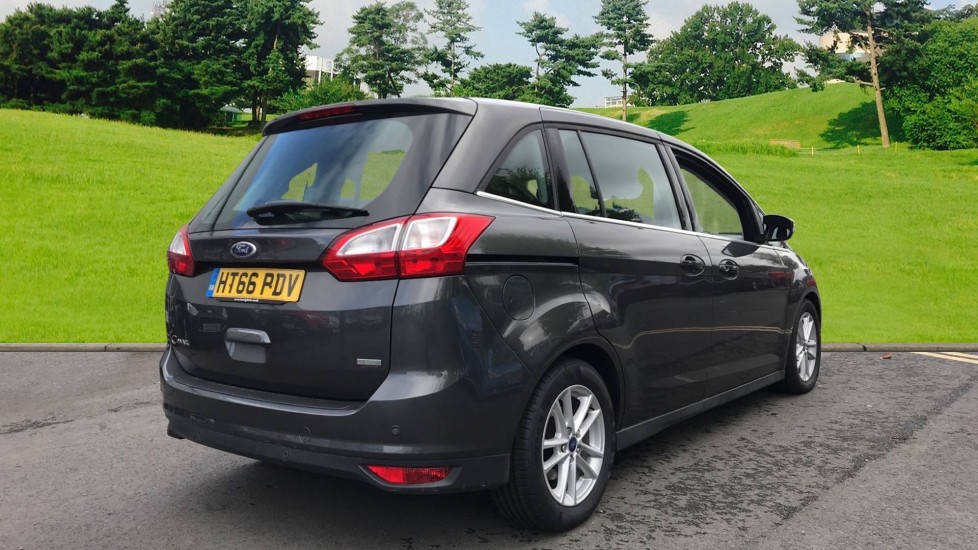 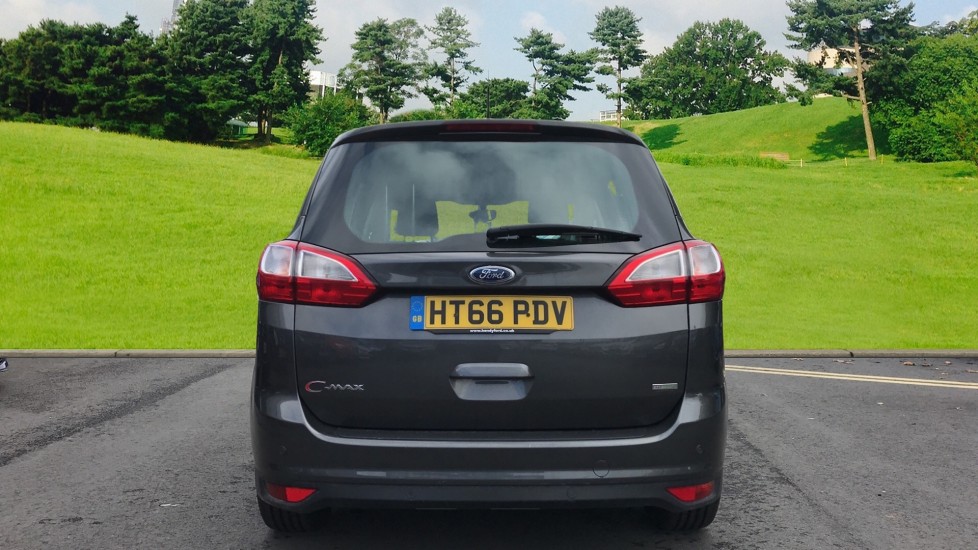 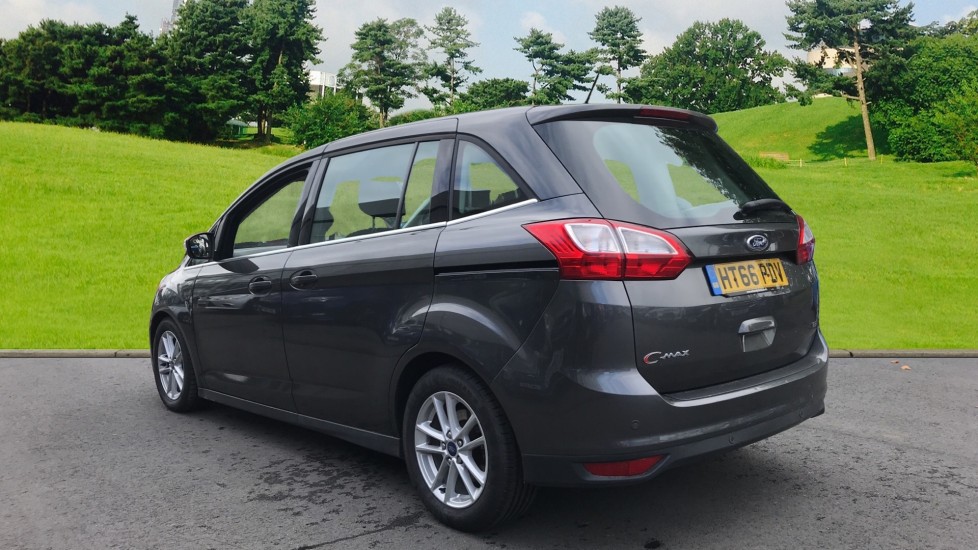 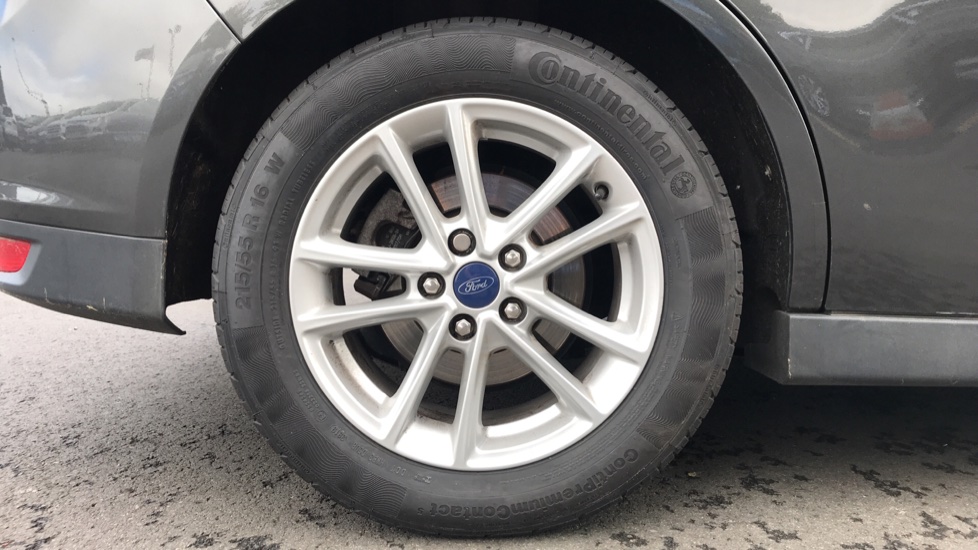 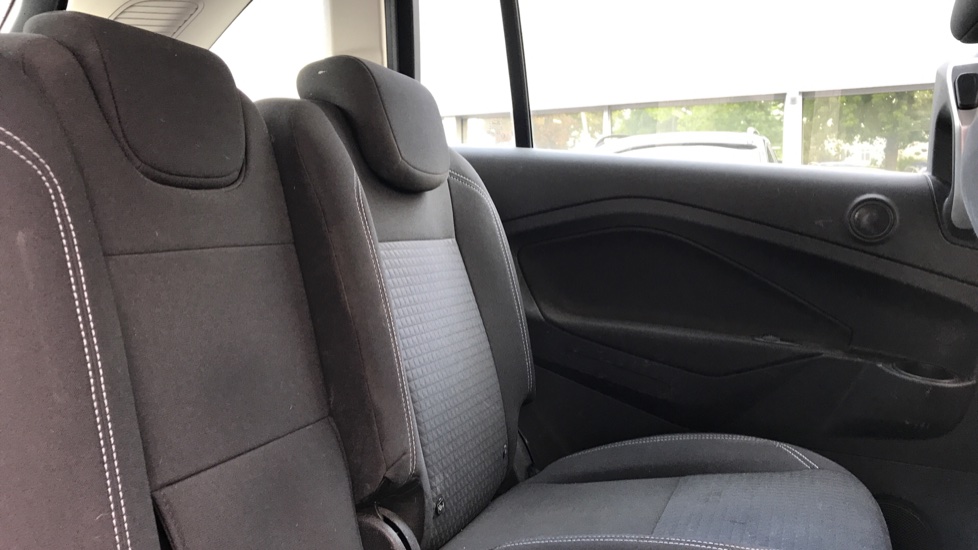 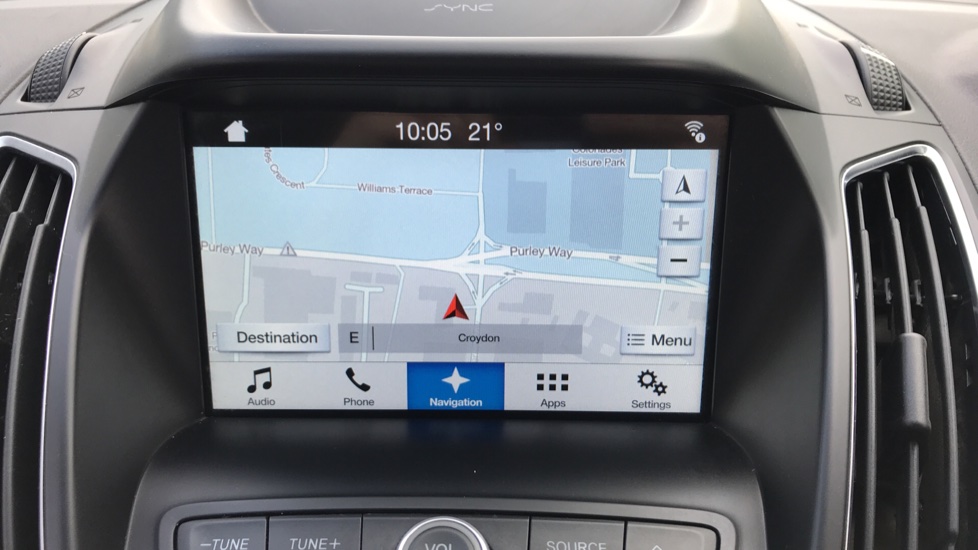 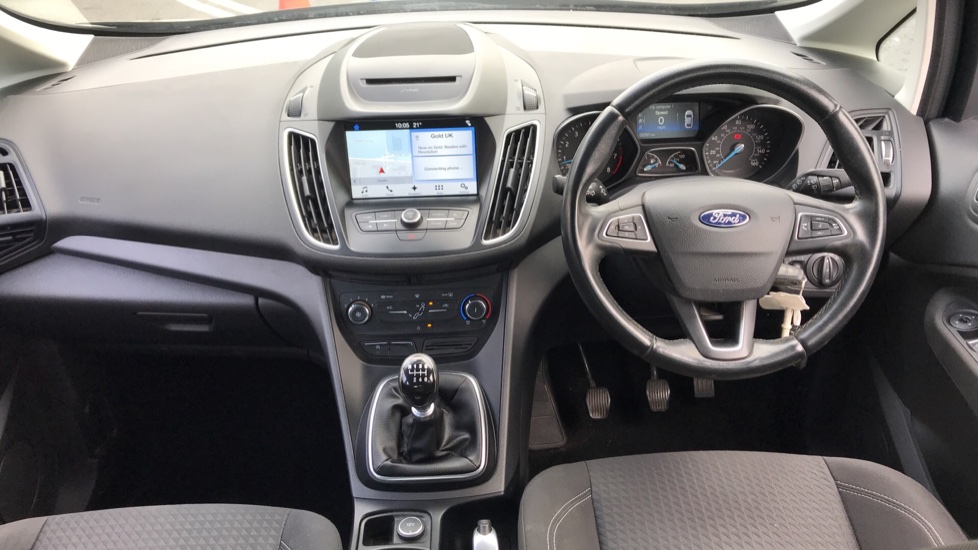 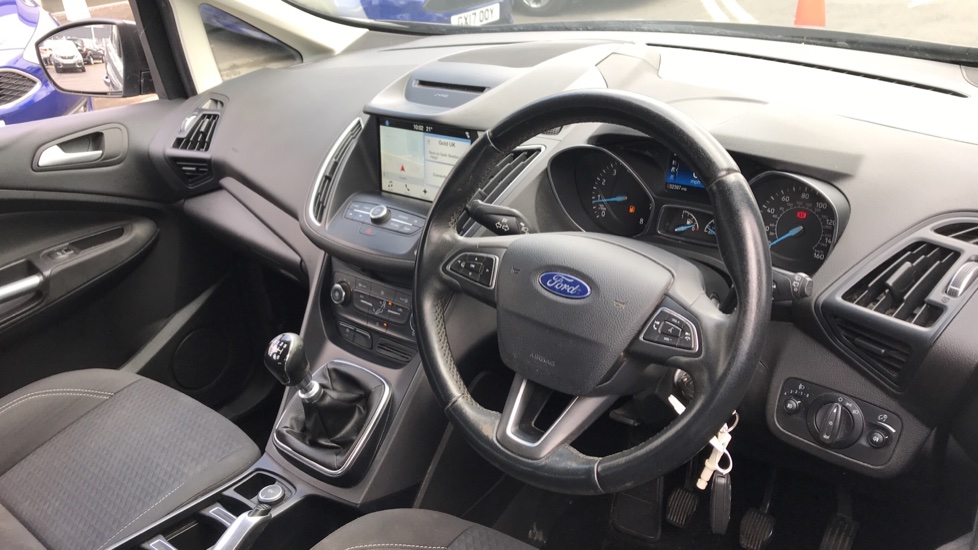 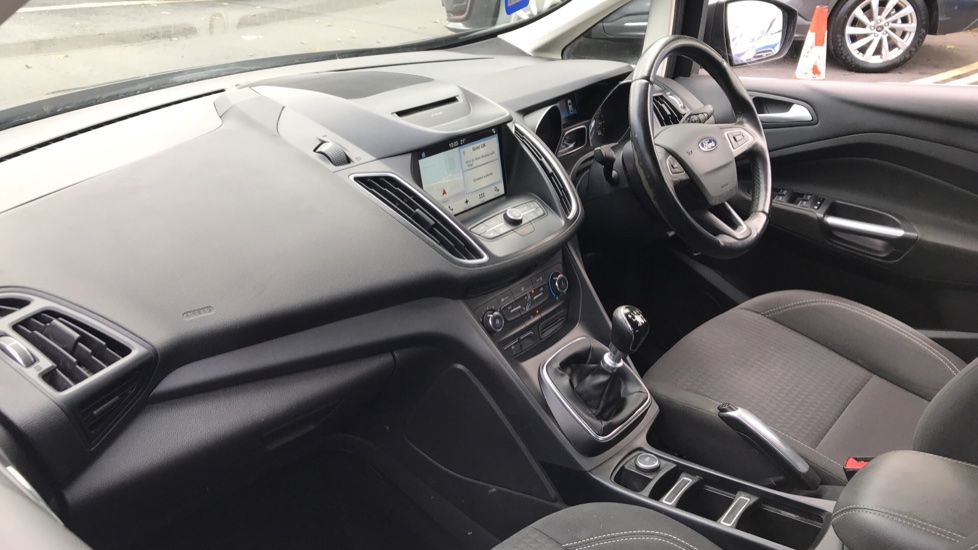 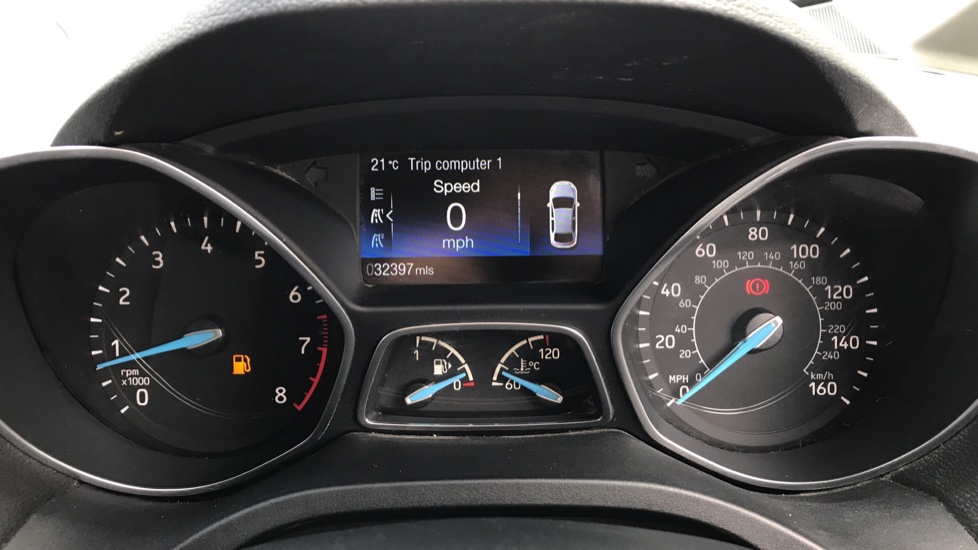 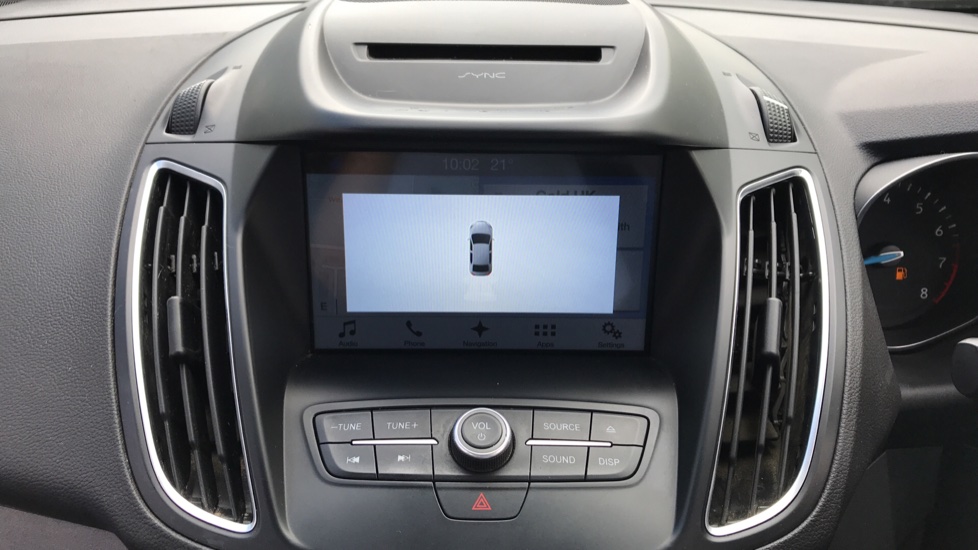 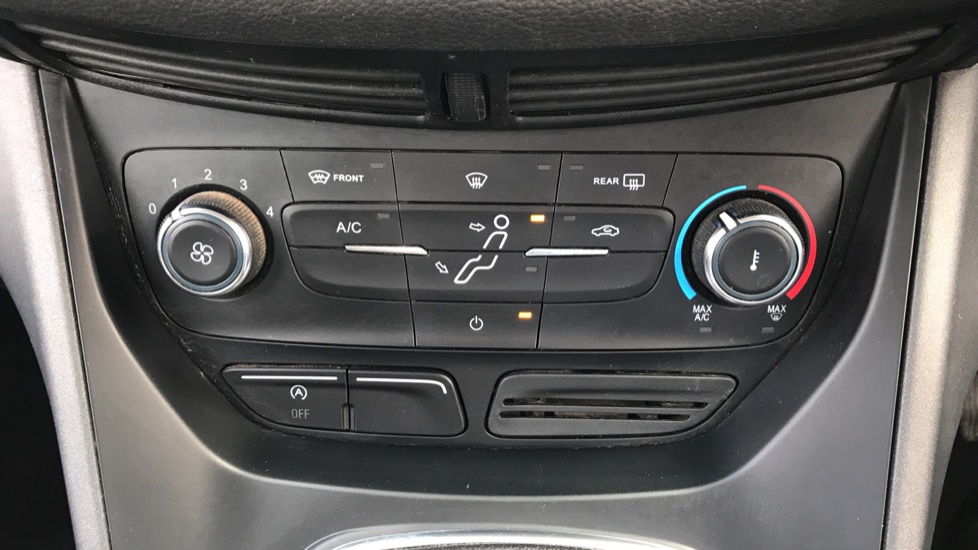 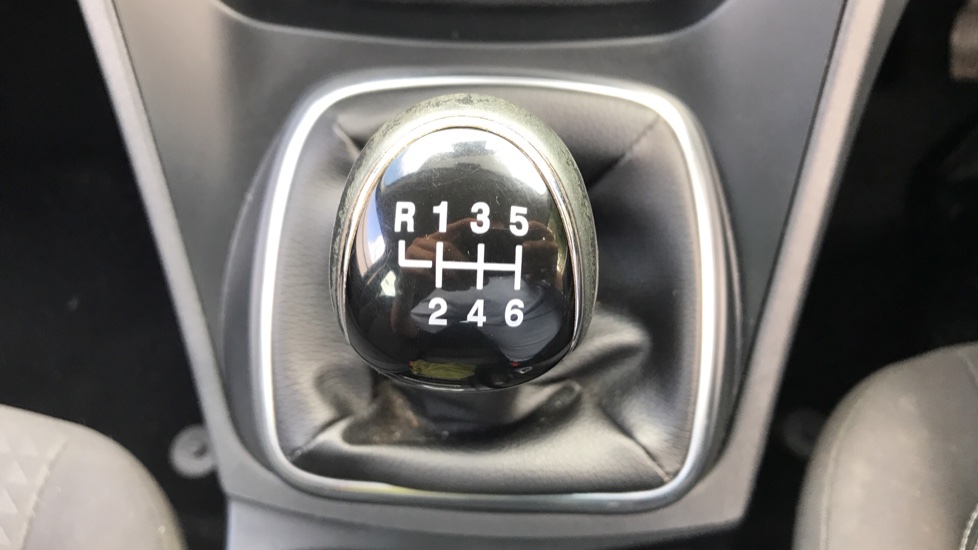 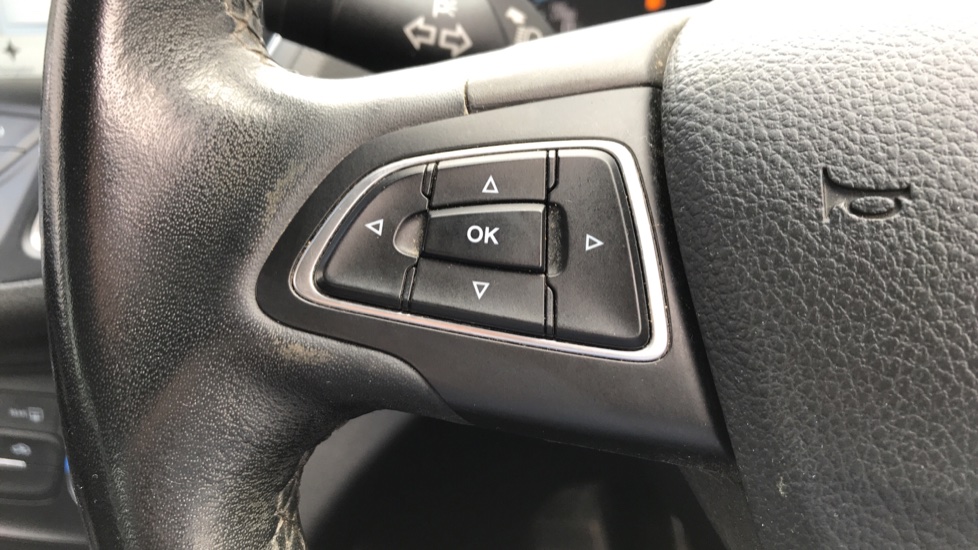 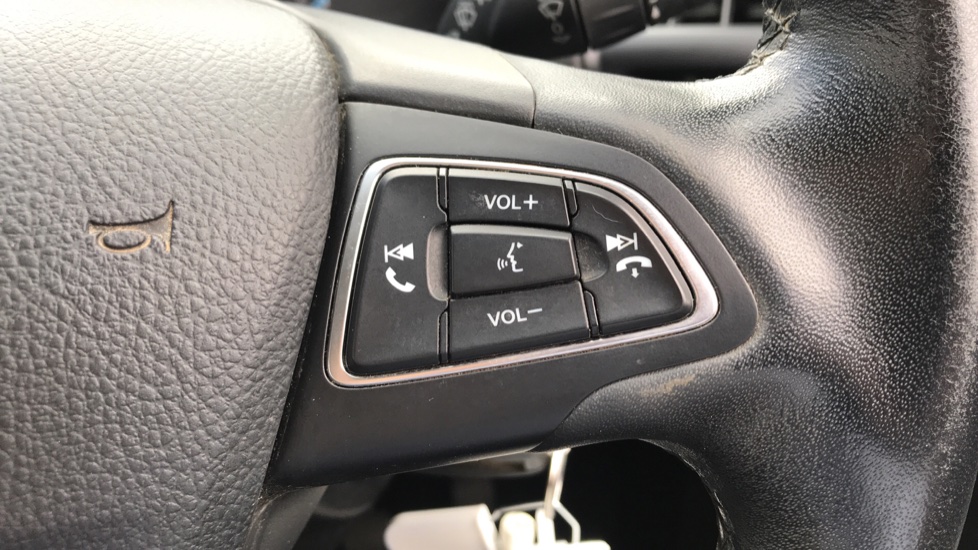 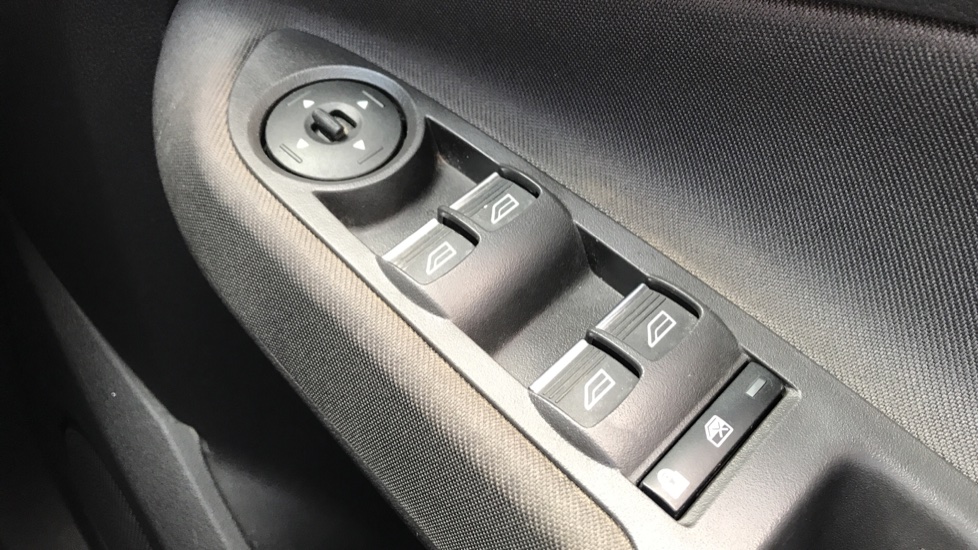 The Ford Grand C-MAX seven-seat compact MPV has long been the best People Carrier of its kind to drive. In this revised post-2015 form, it also brought a range of useful fresh technologies to this segment and benefitted from smarter looks and a revised range of more efficient engines. As with the original version of this second generation model, you also get clever seat-folding mechanisms and plenty of space as part of an accomplished range of virtues.

It took Ford until 2010 to offers buyers in the compact MPV segment the option of seven seats. Still, when this Grand C-MAX model did arrive in 2011, it turned out to be a thoroughly well-engineered contender, here reviewed in updated post-2015-era guise, its revised second generation form. Like its five-seat C-MAX stablemate, this model's most unique selling point is the way that it's so much sharper to drive than obvious rivals. Aware though, that handling dynamics aren't an over-riding priority for most likely MPV buyers, Ford also included a range of other attributes rare in this segment - practical things borrowed from larger People Carriers. Like sliding side doors and clever seat-folding mechanisms. All this firmly established the Grand C-MAX as a seven-seat compact MPV that was difficult for potential buyers in this sector to ignore. By 2015 though, the market was looking much tougher and buyers were expecting considerably more in terms of safety, technology and efficiency. Hence the need for this much improved version, a car that was cleverer, more affordable to run and which featured a whole range of segment-first convenience features. Depending on the spec you choose, this rejuvenated Grand C-MAX model will park itself, stop itself in an emergency and open its rear hatch for you if your arms are full of shopping. It can connect you to the web, find you a restaurant and even limit its capabilities to suit your preferences if you happen to lend it out. At the same time, it can return early 50mpg plus, and, as was possible with the original version of this model, it can seat up to seven and feel rewarding on the back way home after everyone's been dropped off. This improved Grand C-MAX sold until late 2019 and then wasn't replaced as buying preferences turned towards SUVs.

This Grand C-MAX was the version of the C-MAX that Ford chose to sell in its home Stateside market, so prior to the original launch of this model in 2010, there was quite a bit of pressure on the Blue Oval's design team to get this seven-seat body style right. Though sitting 58mm higher than the five-seat variant, it's only 140mm longer, which might make you wonder whether it's big enough for larger American families, let alone European ones - until you realise that this remains a car well over 4.5-metres in length. The looks aged well, requiring just a little freshening up in 2015 to keep this model looking current. And that's exactly what was delivered here. This updated version's restyling package was supposed to reflect the brand's so-called 'One Ford' global design language. Hence the addition of the distinctive trapezoidal front grille familiar from most of the company's other models, which joined the sleeker, 'chiselled' front headlamps. The cabin updates for this facelifted MK2 model included classer black satin trim and chrome detailing that contributed to a modern look. Some of the functions were simpler to use - the air conditioning controls for example, which gained buttons that were easier to recognise and distinguish. Others were relocated to the SYNC2 infotainment screen that on most models was added to dominate the centre of the dash. Take a seat in the second row and at first glance, things look quite familiar for a compact 7-seater of this kind. Look a little closer though and real innovation reveals itself in the form of the 'seat-eating-seat' mechanism where the rather narrow centre perch disappears into the seat alongside to provide a clear walkway into the rear between two middle chairs that then offer far more space for their occupants. Those who make it back to the third row are unlikely to be especially comfortable if they're of basket ball-playing height or overly familiar with the offerings of Colonel Sanders. These perches are intended for children - or reasonably agile adults on shorter journeys. And luggage room? Most of the time, Grand C-MAX owners will be travelling with these rearmost seats folded down, in which guise the luggage area can swallow up to 448-litres loaded to the parcel shelf. If you do need more space, then folding forward the second row seating frees up as much as 1,715-litres.

We found lots of satisfied Grand C-MAX customers but inevitably, our survey revealed quite a few issues too. We had various reports of electrical glitches and rattly interiors are quite common, so check on your test drive and re-negotiate if necessary. Another typical faulty is a DAB tuner that doesn't work. Often iPod/phone connectivity ports/systems stop working too, so connect up and try these. One owner complained of an engine misfire which needed a software update. Another found the horn stopped working. Another complained of noisy brakes. Some owners with auto gearboxes weren't happy, reckoning that problems started occurring after around 5,000 miles of use. As for the manuals, well these seem generally fine but one owner found that there was a 'clunk' every time the clutch engaged; another said the gear gaitor kept popping out of its fitting every time he selected reverse. More seriously, in one case, the anti-freeze holder on one Grand C-MAX drained into the oil sump, leading to a breakdown. Otherwise, you'll just need to look for the usual scratched alloys and evidence of child damage in the back. The cabin plastics mark easily, so check them carefully; this could be grounds for a small price reduction. As usual, check that the service book is fully stamped up to date. Some ex-fleet models may have missed out on garage visits.

On the move, despite being 110kg heavier than its five-seater stablemate, this Grand C-MAX model remains a class leader when it comes to handling dynamics. A standard torque vectoring system helps you get the power down through corners in which you'll really be able to place the car precisely thanks to re-tuned electric power steering that offers impressive levels of feel. Ford further improved the whole experience in this revised model, fitting stiffer suspension brushes and re-tuned dampers that reduce body roll without creating too much of an over-firm ride. Under the bonnet, most C-MAX buyers in search of petrol power will be looking at the two 1.0-litre EcoBoost engines and the choice Ford gives of either 100 or 125PS power outputs. Otherwise, potential buyers will be wanting to look at a diesel, probably the 120PS 1.5-litre unit. Here, 62mph is 21.3s away from rest and there's 270Nm of torque that gives you decent pulling power. Yet this variant will also return up to 64.2mpg on the combined cycle and put out no more than 113g/km of CO2 (both NEDC figures). If you do need a bit more performance, then Ford also offers a 150PS 2.0-litre TDCi diesel.

There are clear advantages in turning up late for any party and when in 2011, Ford became the last of the mainstream makers to bring us a seven-seat compact MPV, the brand took every opportunity to maximise its prospects with this Grand C-MAX model. Having looked at the options that other makers were offering in this segment, the company picked up on the need for a contender that would deliver things like sliding doors and more sophisticated seat folding mechanisms. Their engineers also noted just how dull most People Carriers of this kind were to drive. The result was an opportunity to redefine how a car of this kind should be. This Grand C-MAX did that at launch and continued to do so in this usefully revised post-2015 facelifted form. Of course, it's not perfect. Some rivals from this period shade it in terms of ultimate carriage capacity or cabin quality, while others are slightly cheaper. There's not much in it though and what's not up for debate is the fact that this Ford still leads the field by a useful margin when it comes to finding a mid-sized 7-seat MPV from this period with great driving dynamics. Perhaps what changed with this facelifted design though, is that if that doesn't matter to you, then there are here other reasons to still seriously consider this car. You can certainly see why so many families like it.