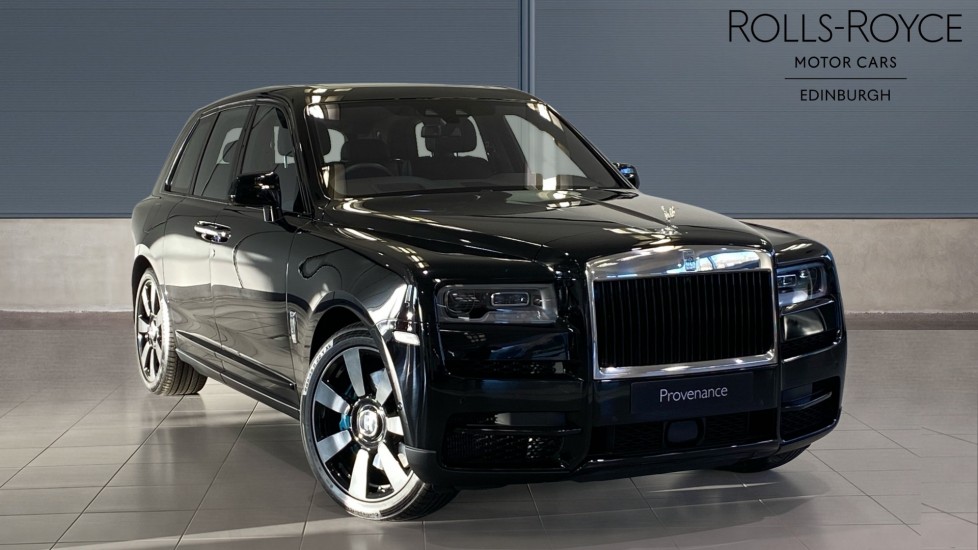 Get Your Best Price
Reserve Now Make an Enquiry Value My Vehicle Call Me Back Test Drive Make a Bid Save CarRemove Car Compare Compare Can I Get Credit? In the Cullinan, Rolls Royce has delivered not only the world's most exclusive luxury SUV but also its most divisive car ever. Much of the engineering is shared with the Phantom and with various BMW models, but this exclusive brand has blended it all together into a car that has a very unique personality that you'll either love or hate. One thing's for sure; there's nothing quite like it.

Does the world need a Rolls Royce SUV? Apparently so because this car, the Cullinan, is sold out for years ahead. It's the first model of this kind that the brand has produced and, perhaps a little more surprisingly, the first to feature 4WD. That set up is BMW-derived but the bespoke aluminium space frame the huge body sits upon isn't - Rolls wants to move away from the Munich maker's architecture. Unsurprisingly, the company hasn't engineered this model for Range Rover-rivalling off road prowess. Instead it's intended for what the company calls 'the lost mile' element of journeys - the awkward final bit of a multi-millionaire's journey to his ski lodge or partridge shoot. Ultimately, this was always going to be a controversial car. But is it a good one? Let's find out...

There's not much about the engineering of the Cullinan that's unfamiliar. The aluminium platform is shared with the Phantom, as is the 6.75-litre V12 plumbed in beneath the expansive bonnet. It puts out 563bhp but here has been tweaked for the kind of greater low down torque appropriate for an SUV. It drives through another familiar Rolls fitment, an 8-speed auto gearbox that allows the sat nav to help with gear selection but not the driver. And power gets to the tarmac, the mud or the snow via an embellished version of BMW's xDrive 4WD system that, via an electronically-controlled clutch, can send up to 100% of power to the rear axle or divert up to 50% of it to the front, as required. There's all of BMW's choicest active drive dynamics technology of course, electrically-active anti-roll bars (needed because there'd otherwise be Channel Ferry levels of roly-poly cornering demeanour). Plus you also get active rear-wheel steering (needed to avoid the turning circle being comparable to that of a London bus). And of course electronically-controlled air suspension, which rises by 40mm in off road mode. There's nothing as crude as a low range gearbox of course (so owners can't expect this car to match a Range Rover on the rough). But apparently, if you switch the stability control off, it locks the all-wheel drive into a 50:50 torque split, which ought to be enough to help owners extradite themselves from a mildy mucky spot. On tarmac, 62mph from rest is impressively brisk given the gargantuan weight - 5.2s dead. But the towing capacity at launch was quoted at just 2.5 tonnes.

Perhaps it's appropriate given this car's controversial concept that the styling is so divisive. Rolls Royce's former design chief didn't want to style it - and you can see why. The company's top brass insisted on clear brand carry-over aesthetic cues that were never intended to work with an SUV and the result is an odd combination of aesthetic themes that rather remind you of the mess Porsche got into with its very first Cayenne. Having said all that, what's served up here is definitely imposing and clearly exclusive, which, let's face it, is all most likely buyers will really want. Of course, its extravagantly opulent inside - how could it not be. At the wheel, you sit commandingly high grasping a steering wheel somewhat thicker than the Rolls norm and facing a digital instrument binnacle featuring four interlocking Rolls Royce logos. There's plenty of dashboard 'jewellery' of course, with lovely chromium-plated switches and rotary controlled. Plus there's beautiful open-pore wood and exquisite fine leather. As is the Rolls Royce way, the rear doors hinge at the C-pillar rather than the B-pillar and open to reveal a configurable rear cabin. Most owners opt for the three-person rear bench, but a two individual seat set-up is also available with a glass screen behind to improve refinement. Out back, there's a 560-litre boot.

If you're concerned about the price, then you're probably not target market for this car. If you're interested, the figure in question is £276,000, but that's only a starting point; almost all owners will be paying over £300,000 once they've specced their cars to their liking. Standard technology of course isn't lacking. The central information screen is (for the first time in a Rolls Royce) touch sensitive, allowing the driver to quickly select functions, map views and vehicle set-up whilst on the move. This portal can still be controlled from the iconic Spirit of Ecstasy controller which nestles on the central console with the 'Off-Road' button, Hill Descent Control button and Air Suspension height adjustment controls. A host of other cutting-edge technology features makes Rolls-Royce Cullinan the most technologically advanced car of its type in the world. Further equipment includes a Night Vision and Vision Assist system, including daytime and night-time Wildlife & Pedestrian warning. Plus there's an Alertness Assistant; a 4-Camera system with Panoramic View, all-round visibility and helicopter view; Active Cruise Control; Collision Warning; Cross-Traffic Warning, Lane Departure and Lane Change Warning; an industry leading 7x3 High-Resolution Head-Up Display, a WiFi hotspot; and of course the latest Navigation and Entertainment Systems.

Naturally, the most overriding concern will be residual value. Buying a big, expensive car that doesn't quite hit the mark is a more effective way to burn money than wiring cash to Nigeria in the hope that one of those letters from obscure businessmen looking to get their millions out of the country has to be genuine. I can't see catastrophic depreciation being the fate for the Wraith though. There's something ineffably special about this car. Call it a daringness or a certain extremity of character but the Cullinan is never going to be remembered as a makeweight Rolls. On virtually every other financial measure, the car will pound your wallet. Insurance is best obtained through a specialist, while fuel consumption is optimistically claimed to be 18.8mpg, although a figure around 13mpg might be more realistic in day to day driving. Carbon dioxide emissions are 341g/km, predictably landing you in the highest rating for road tax. To be honest, who cares? This is a car that's all about sensation and the way it makes you feel. On those scores, it's an unqualified success.

Rolls Royce is unphased by the mixed reaction this car has received, pointing to a bulging order book and an almost universally favourable reaction from loyal customers who've been waiting years to replace their Range Rovers with something more upmarket. If you don't like the Cullinan, it's likely that it wasn't aimed at you anyway. If you do, then no other super-luxury SUV will satisfy you as much. There is after all, quite simply no other car of this kind that can transport you with greater luxury and refinement, No other SUV makes as important a statement of your net wealth. And no other 4x4 offers the kind of craftsmanship and exclusivity that sets this one apart. Which means that if you have the means to buy a Cullinan, you might well be the kind of person who'll find this car difficult to resist.